I recently had a great fortnight working in Paestum, in the province of Salerno, Italy.

Paestum was a Greek city on the coast of the Tyrrhenion Sea before being conquered, first, by the Lucanians and then the Romans. The city was abandoned in the early middle ages and was left forgotten until the eighteenth century.

The ancient city has three large Greek temples still standing and many other artifacts from its history with a museum, the Paestum National Archaeological Museum, dedicated to the city.

The modern town of Paestum is now a popular seaside resort, however during the winter months this becomes practically abandoned. These photographs contrast, or not, the differences between the modern and ancient Paestum. 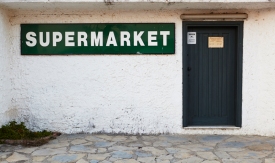